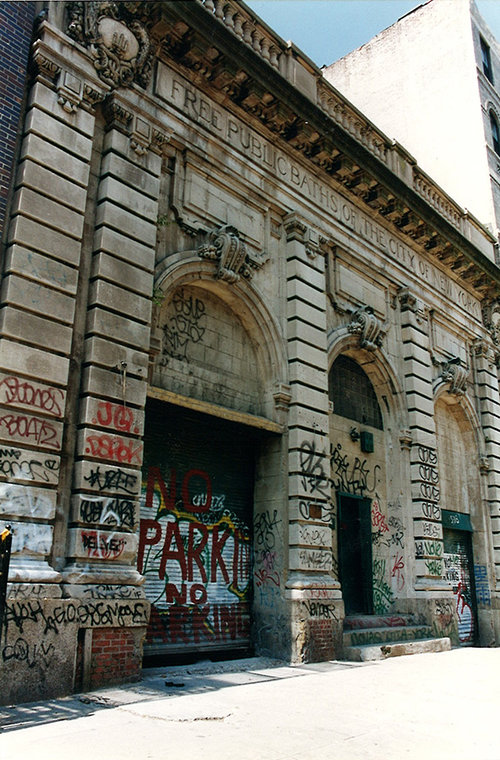 A highly intact work of prominent architect Arnold W. Brunner, the Free Public Baths of the City of New York, East 11th Street Bath at 538 East 11th Street is also culturally significant for its part in the histories of the progressive reform movement in America and the immigrant experience on the Lower East Side. Built between 1904 and 1905 and designed in the Neo-Italian Renaissance style, the bath (as well as the other thirteen City-operated public baths opened between 1901 and 1914) was the result of hard-fought efforts made by progressive reformers decades earlier. The public bath movement in the United States began in 1840s New York, gaining momentum in the last quarter of the nineteenth century when charitable organizations opened public baths for a small fee on the Lower East Side. Led by Doctor Simon Baruch, “the father of the public bath movement in the United States,” they pressured the municipal government to open multiple free public baths throughout the crowded tenement districts in order to provide immigrants with bathing facilities that were non-existent in their own apartments. The two-story East 11th Street Bath was situated in a predominantly German neighborhood a block north of Tompkins Square Park and was equipped with seven bathtubs and 94 showers, or “rain baths” as they were known. Reflecting Victorian sensibilities, the men’s and women’s arched entrances were placed on opposite ends of the façade that led to entirely separate waiting rooms and shower rooms. Attendance was greatest in summer months; during the 1906 heat wave, “people stood in lines ‘four deep’” and it soon became apparent that the poor used the baths more as a means of cooling off than for hygienic reasons. Gradually, as bathrooms became standard in apartment buildings public baths were less patronized. Closed in 1958, the building was used as a garage and warehouse until 1995 when Pulitzer Prize-winning photographer Eddie Adams and his wife Alyssa Adams bought and converted it into a high-end studio for Eddie’s studio work for Parade Magazine. Adams passed away in 2004 of Lou Gehrig’s disease but his legacy lives on through the Eddie Adams Photojournalism Workshop in upstate New York and his photo collection which is housed and accessible through the Briscoe Center at the University of Austin in Texas.

The renovation project of Bathhouse Studios

One of the premier rental spaces in New York City. Bathhouse Studios, Located in the East Village, is the ideal freestanding building for virtually any type of shoot or event.